Smallpox – What you need to know

Contact Nationwide CCS if someone in your facility has a confirmed Smallpox Case. We offer Decontamination and Sanitizing Services Nationwide! 888-379-3478

Thousands of years ago, variola virus (smallpox virus) emerged and began causing illness and deaths in human populations, with smallpox outbreaks occurring from time to time. Thanks to the success of vaccination, the last natural outbreak of smallpox in the United States occurred in 1949. In 1980, the World Health Assembly declared smallpox eradicated (eliminated), and no cases of naturally occurring smallpox have happened since.

Smallpox research in the United States continues and focuses on the development of vaccines, drugs, and diagnostic tests to protect people against smallpox in the event that it is used as an agent of bioterrorism. 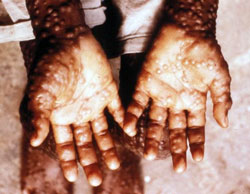 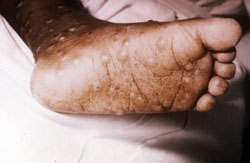 Before smallpox was eradicated, it was a serious infectious disease caused by the variola virus. It was contagious—meaning, it spread from one person to another. People who had smallpox had a fever and a distinctive, progressive skin rash.

Most people with smallpox recovered, but about 3 out of every 10 people with the disease died. Many smallpox survivors have permanent scars over large areas of their body, especially their faces. Some are left blind.

Thanks to the success of vaccination, smallpox was eradicated, and no cases of naturally occurring smallpox have happened since 1977. The last natural outbreak of smallpox in the United States occurred in 1949.

How does Smallpox Spread?

Before smallpox was eradicated, it was mainly spread by direct and fairly prolonged face-to-face contact between people. Smallpox patients became contagious once the first sores appeared in their mouth and throat (early rash stage). They spread the virus when they coughed or sneezed and droplets from their nose or mouth spread to other people. They remained contagious until their last smallpox scab fell off.

These scabs and the fluid found in the patient’s sores also contained the variola virus. The virus can spread through these materials or through the objects contaminated by them, such as bedding or clothing. People who cared for smallpox patients and washed their bedding or clothing had to wear gloves and take care to not get infected.

Rarely, smallpox has spread through the air in enclosed settings, such as a building (airborne route).